First day back to a brand new school 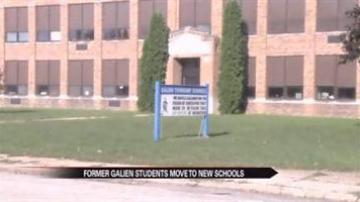 GALIEN, Mich. – With Galien Schools closing at the end of last school year, parents have no choice but to send their kids to a new school tomorrow for their first day.

Monday morning 10-year-old Brooke Clanton got a backpack full of school supplies dropped off by the former Galien Schools secretary, but because of the schools’ closure, the fifth-grader won’t be returning to Galien.

She will be starting her first day back Tuesday at Buchanan Middle School.

“I am going to transfer tomorrow,” said Brook Clanton.

“Being the new kid anywhere is tough so I hope she will adjust okay,” said Shane Clanton.

He is still a little attached to Galien, his daughters old school, that happens to be right in front of their home.

“Being that it is right across the street, we always like that it felt safe, we liked the area and it is unfortunate that the school shut down,” said Shane Clanton.

Clanton is concerned about his daughter going from a two-minute a walk to a thirty minute bus ride.

“The bussing portion, we would have liked not to have that,” said Shane Clanton.

He would have rather have his daughter transfer to River Valley, but the classes were just too full.

“A lot of the other schools in the area taking the load on so it is slim pickings,” said Shane Clanton.

But Clanton’s daughter Brooke doesn’t share her dad’s concern, she said even though she thinks her new, bigger school will be more difficult academically, she is up for the challenge.

“Well I am going to try a lot harder than I did in Galien,” said Brooke Clanton.

Even though she will miss some of her old friends at Galien, she cannot wait to make new ones.