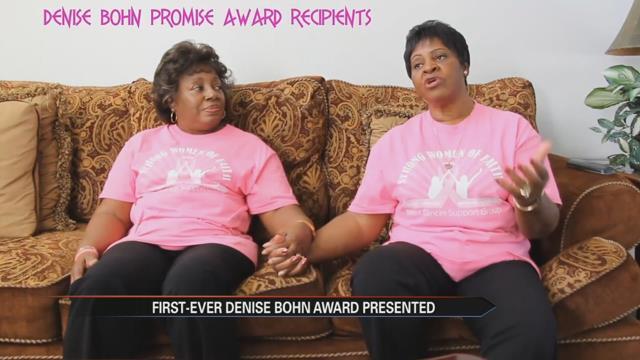 Their names are Dottie Moon and Bertha Carson-King, and they founded Strong Women of Faith Breast Cancer Support Group.

“I’m on a mission. If we can do one thing and get one woman in to get a mammogram, and her life is spared. That’s just a blessing,” said Dottie Moon.

That mission is exactly what earned Moon and King the first ever Denise Bohn Award.

“We’re so fortunate to be able to make a difference for women in our community of Benton Harbor and Berrien County,” said Bertha Carson-King.

Just like Denise Bohn made a difference before being murdered in April 2016.

“What you see around you tonight speaks volumes as to the legacy she’s left,” said Brant Coulter, who planned the event.

“She’s probably the most driven person I’ve ever met in my life. When she gets onto something, man it will get done,” said Bohn’s former co-worker Pat Moody.

That’s why Brant Coulter vowed to make sure this event still happened after Denise died.

“It’s a promise that I made to her last year that we were going to get this across the finish line, and I feel like she’s up there helping us tonight,” said Coulter.

Even if her friends think she wouldn’t want an award to be about her.

“She’d go it’s not about me. Don’t—you know. Just go out and fight your fight,” said Moody.

And that’s how the first-ever recipients plan to honor Denise’s memory.

“My god Denise was such a wonderful person with a vision for what we’re doing and supported us wholeheartedly, and we certainly want to thank everyone who made this possible for Dottie and I to be nominated. Thank you so much. Thank you Denise. We love you,” said King and Moon.

Event organizers say they won’t know the total dollars raised for a week or so, but they expect that it will be in the thousands.