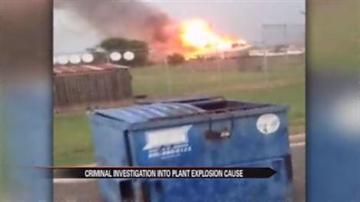 A first responder in the Texas fertilizer explosion was arrested for possession of a destructive device.

Bryce Reed was one of the speakers at a memorial for the victims.

His arrest has not been tied to the deadly blast.

The cause of that explosion is now a criminal investigation.

So far, four possible causes have been ruled out.

Investigators have interviewed more than 400 people to try to figure out exactly where that fire started.