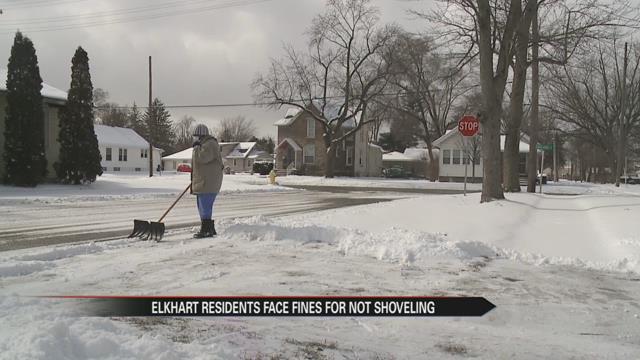 In Elkhart an ordinance that requires that people shovel 24 hours after a snow storm is under review.

On Wednesday after heavy snow falls city officials are not writing tickets if you don’t clear your sidewalks.

Reviewing the ordinance also means the suspension of city assistance to help those with a hardship.

Janyth Tidwell of Elkhart says this is the first time in months she’s had to pick up a shovel.

“I’m grateful that it’s February and I didn’t have to do it in December and January,” says Tidwell.

She wears a face mask to keep the cold air out of her lungs.

Despite age, health concerns, and the fact that she was previously on the exemption list she was out on Wednesday clearing her sidewalks.

“We have to keep our sidewalks clean for your neighbors and school kids,” says Tidwell.

City officials are hoping all citizens share this attitude now that a $25 fine for not shoveling is not being enforced.

“We would hope that the citizens of Elkhart would do what they need to make sure they can get on the sidewalks and people can walk down the sidewalks,” says Dennis Correll, Building Commissioner.

Correll says with the shoveling ordinance being reviewed that also means hardship exemption applications are also being suspended.

“We don’t want to give an indication that we are doing something for one citizen that we cannot do for all citizens,” says Correll.

The hardship application doesn’t require any type of medical record adding to the reasons why the ordinance is being reviewed.

In the mean time Correll believes in the citizens of Elkhart.

“I saw people that were shoveling their own walk without any prompting and people need to take care of themselves and take care of others,” says Correll.

A Common Council member says revamped language on this ordinance should be presented in about two months.