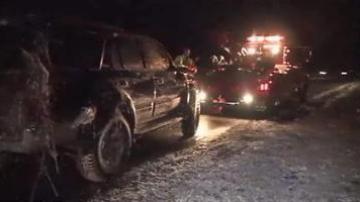 For Jerry Kindig the busiest time of the year is finally here.

"You know we hate to say it, that other people's dilemmas turn out to be our profit, but that's really what happens,” said Kindig.

Kindig is the General Manager for Howard's Towing in Elkhart. Tuesday morning was the season opener for "towing."

"I mean when motorists need help, that's why we're out there and historically the bad or inclement weather is what causes a lot of those problems,” said Kindig.

According to the Elkhart County Sheriff's Department, the first snowfall of the year is to blame for nearly 60 vehicle accidents around Elkhart County Tuesday morning, including a 20 car pile up on the bypass.

"They were all in the same location so it's not too far of a stretch of road, but the area that was shut down was from State Road 19 to Elm Road in Saint Joseph County,” said Lieutenant Travis Adamson of the Elkhart County Sheriff's Department.

"That roadway out there is just conducive to freezing over what they call black ice,” said Kindig.

The sheriff's department says there were three separate accidents that all occurred at the same time.

Unfortunately for Kindig, a communication problem kept his crew from heading out into the pile up.

But there were plenty of other tows to keep him busy.

Fortunately there were no injuries from the accidents on the bypass Tuesday morning. But both the sheriff's department and Kindig say that whenever there is snow, drivers need to slow down and maintain a safe distance between cars.