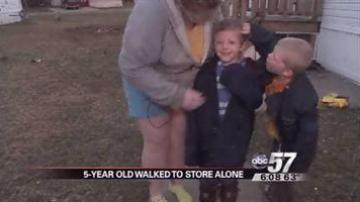 GOSHEN, Ind. --  A five-year-old boy was found all alone crying at a Martin's grocery store in Goshen.  The manager tried paging his mom, but she was not even in the store.  She was a mile away at home.  He walked there all by himself from Twin Pine Mobile Home Community, crossing a busy road and even railroad tracks.

"I would still think that other parents in the community would help me", said Cooper.

Brandy Cooper says she is in over her head, as a single mom of five young kids.  In face so over her head she didn't even know her five-year-old son Andrew was missing.

"The cops came knocking at my door--and it's a scary feeling, it really is", said Cooper.

Scary for Cooper, but you could only imagine how scared little Andrew was crossing this busy road and these railroad tracks all by himself.

"He is special needs...he is not mentally all there...he is immature for his age", said Cooper.

So the big question is where was mom?  She says she was home and thought Andrew was out playing with other kids, but neighbors are not buying it.

"She shouldn't have those kids", said Christine Rogers.

"I've seen them running them running around naked..without shoes on..without a shirt on..i've told her a million times to put clothes on them kids..she doesn't watch them", said Rogers.

"They said CPS would be called and that is just following procedures", said Cooper.

Cooper admitted she needs some work on her parenting skills, would even like classes to teach her how to be a better mom, but says money is to blame.

"I don't have the resources i need to show me how to be the right parent", said Cooper.

At this time Cooper is not facing any criminal charges.

CPS is investigating her right now for child neglect.