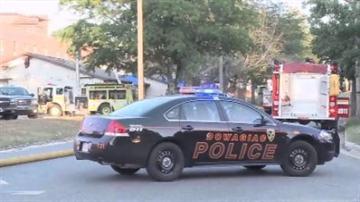 DOWAGIAC, Mich. -- The Dowagiac Public Safety Department arrived at the Borgess-Lee physical therapy clinic just after 6:30 p.m.  Officials say black smoke was billowing out of the roof on the westside of the building.

"I walked out here, my cousin pulled up, he got out of his truck and ran in the building."

Chris Ledford lives across the street from the clinic. He says his cousin is one of the fire fighters who ran into the burning building.

"It was crazy, I was worried about him but I knew he was alright."

Officials say no one was injured in the fire but at one point, the firefighters thought they had a man-down.

"The firefighters did what is called a mayday; where they stop operations to go in a check for that individual who is not responding," explained Steve Grinnewald, Director of Public Safety for Dowagiac.

Thankfully, it was just a false alarm.

"He was located very quickly, it was just a communication problem."

Firefighters battled the flames for over an our as of Thursday night, investigators were still looking into what caused the fire.