Flight 370 search: 'We cannot be certain of ultimate success' 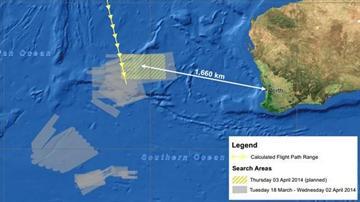 PERTH, Australia (CNN) -- Australian Prime Minister Tony Abbott on Thursday described the search for Malaysian Airlines Flight 370 as "the most difficult in human history" and warned there was no guarantee the missing plane would be found.

"We cannot be certain of ultimate success in the search for MH370," he said at a news briefing in Perth, the western Australian city that is serving as the hub for search operations. "But we can be certain that we will spare no effort -- that we will not rest -- until we have done everything we humanly can."

Abbott was speaking during a visit to Perth by Malaysian Prime Minister Najib Razak, who met with members of the search teams who have been scouring a remote part of the southern Indian Ocean for traces of the jetliner.

"They told me of the difficulties of a search like this, of distance and weather and of maintaining morale over a long period," Najib said.

His visit came on the 27th day of the hunt for the passenger jet, which disappeared March 8 over Southeast Asia with 239 people on board.

Investigators are yet to provide an explanation of why the plane flew way off course or pinpoint exactly where it ended up. Officials say that an analysis of the available data suggests the jet's journey finished in the southern Indian Ocean.

'Till hell freezes over'

Weeks of combing vast areas of ocean have turned up plenty of floating junk, like old bits of fishing gear, but so far no sign of the plane.

The search efforts Thursday involve as many as eight planes and nine ships over an area of about 223,000 square kilometers (86,000 square miles).

Authorities say they will persevere despite the challenges.

But while officials are refusing to give a timeframe, the clock is ticking for one part of the search. The batteries powering the beacons attached to the plane's flight recorders are expected to run out in the coming days.

An Australian naval vessel equipped with special U.S. technology designed to detect the pings from the flight recorders is due to arrive in the search area Friday.

But until searchers can find a confirmed piece of debris from the plane, which would give them an idea of where the wreckage might be located, the sophisticated listening technology is of little use.

With the hunt at sea so far proving fruitless, there are no signs of a breakthrough in the investigation into those on board the plane.

All 227 passengers have been cleared of any role in hijacking or sabotage or having psychological or personal issues that might have played a role in the plane's disappearance, the inspector general of Malaysian police, Khalid Abu Bakar, told reporters Wednesday.

Police said a review of a flight simulator found in a pilot's house proved inconclusive. And senior Malaysian government officials told CNN last week that authorities have found nothing about either of the two pilots to suggest a motive. There have been no such public comments about the other 10 crew members, however.

Investigators are still questioning relatives of all of those on the plane -- having already interviewed about 170 people -- as well as those who may have had access to it.

That includes scrutinizing those who prepared food for the flight, those who packed the cargo, and those who were to receive the cargo in China.

"Everything from beginning to end," said Khalid, stressing that getting answers won't be easy or quick.

"We have to clear every little thing," he said. "You cannot hurry us in whatever we are doing."