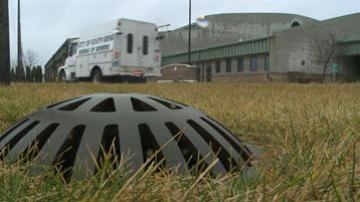 SOUTH BEND, Ind. -- Warm temperatures in January means melted snow and extra water. With more than two inches of rain the last 24 hours, all that water is running off into streets and river. City officials say they're doing everything they can to prevent flooding.

The constant flow of water is something Catherine Washington never stops hearing.

"I feel that we shouldn't have to pay a water bill, until this issue is resolved, because we're getting water in," Washington said.

Her house is located near the ethanol plant.

When the facility shut down in early November, so did its pumps; causing Washington's sump pump to run non-stop.

"It's a scary situation," Washington said.

But flooding isn't just a concern in her neighborhood.

"It's been a little hairy these last couple of days," John Pemberton, Sr., Operations Manager of the South Bend Sewer Department, said.

Unseasonbly warm temps are causing snow to melt, and fast. So much, that the river is rushing; taking on extra amounts of water.

It's not a problem for the city yet, but they'll be paying extra attention these next few days

"The river is coming up a little bit, but we've had guys making sandbags," Pemberton Sr., said. "So, we've got bags ready if we get some low-line flooding, but we've got the crews on top of it and we're comfortable with it."

The city's street and sewer departments are also clearing drains to prevent any water build-up.

"What we don't want to do is leave any flooding on the street," Pemberton, Sr., said. "Where it becomes an ice issue with the weather changing in the next day or so."

With the streets taken care of, homeowners like Washington are hoping their basement is next.

"If we hang in here, I'm quite sure something will be done," Washington said. "And then, if not, then we maybe we'll have to do what we feel is best for our pocketbooks."