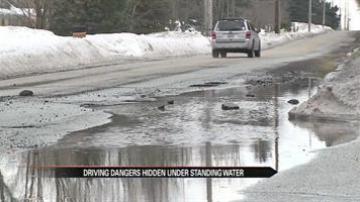 GRANGER, Ind. -- The flood waters did serious damage to some roads in Michiana. Chunks of concrete are missing from roads throughout the area. Drivers have to dodge puddles and potholes everywhere.

"The potholes are outrageous. I just bought a new car and with all these potholes I'm going to have to be in the shop in a couple months," said South Bend resident Terrence Ford.

For the first time in what feels like months, we can actually see bare streets.

In most places there's no snow or rainwater, so you can see all the pothole damage.

At Elm and Adams in Granger, half the road is under water. The water is eating away at the road.

Many drivers drove into oncoming traffic to avoid large potholes.

Police say that's not only illegal, it's dangerous.

"Avoiding something in the roadway is a major cause of traffic accidents," said Captain Phil Trent of the South Bend Police Department.

Crews were out all day Friday trying to repair what they could.

St. Joseph County says several roads will be closed this weekend as crews try to work on the flood damaged roads.