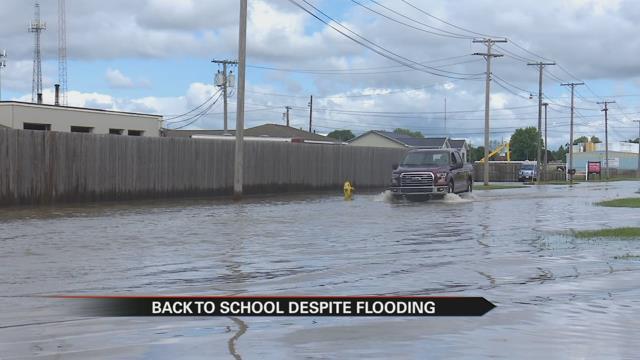 Historic flooding hit on the first day of classes for Mishawaka.

For a district where most students walk to school, some parents faced obstacles.

John Gleissner, who has a son who started school Tuesday, managed to drive over a flooded Beiger Street.

“My kids were very amazed by the water. I’ve never seen it like that here in Mishawaka,” Gleissner said.

Assistant Superintendent Dr. Theodore Stevens says for the most part, things ran smoothly on the first day of school, despite the weather.

“There were a couple issues in town with some flooded,” Stevens said.

Stevens says no day of school is worth a safety risk.

“I’d always advise folks to be patient, and allow themselves plenty of time to get to school,” Stevens said.

There are also dangers after school.

Mishawaka Fire recommends not allowing children to play in puddles, especially puddles on the street.

“It could be something where a manhole is dislodged or anything like that. That’s always possible,” Lt. Jeff Regina said.