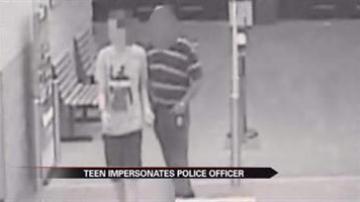 PORT ST. LUCIE, Fla. -- A Florida teen walked into a Wal-Mart carrying a badge and a pellet gun.

The teen claimed it was for protection.

The 17-year-old says the area is dangerous so he and his friend wanted to to like like they could protect themselves.

Then the other boy shoplifted some trading cards.

So the cop impersonator told the store manager he was an officer and arrested his friend. He even slapped the cuffs on his buddy.

"Their whole plot was to make it look like he was arresting him so they wouldn't get caught for the shoplifting," Sgt. Frank Sabol said.

The store manager did not believe the story and called the real police.

But the 17-year-old said there was no plot involved, just a trip to Wal-Mart that went too far.