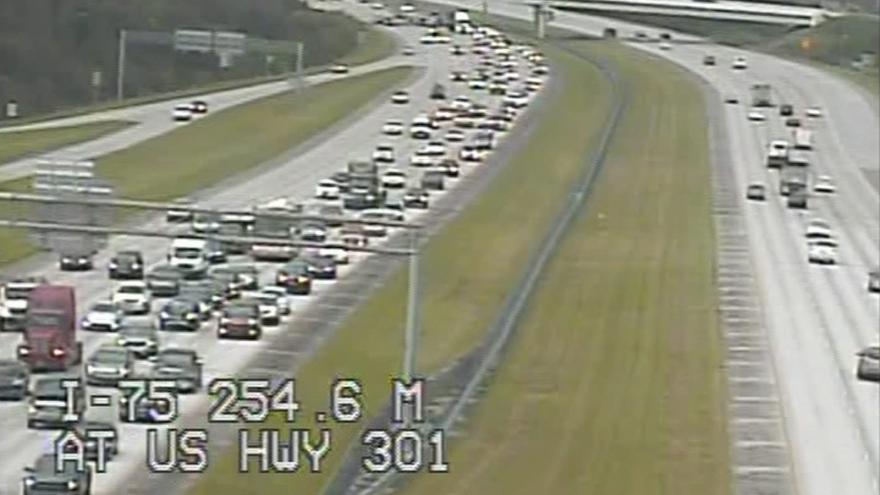 (CNN) -- Floridians began a mass exodus on Thursday as Hurricane Irma, the powerful Category 5 storm, plowed through the Caribbean toward the Sunshine State.

Thousands of cars headed north, causing interstate backups and slowdowns. Drivers waited for hours at gas stations, some of which ran out of fuel. The governor took steps to have more fuel delivered and ordered a temporary halt to toll collections. Travelers stood in line for hours at airports.

Based on Irma's projected path, which includes Florida's heavily populated eastern coast, the enormous storm could create one of the largest mass evacuations in US history, CNN senior meteorologist Dave Hennen said. Miami-Dade, Broward and Palm Beach counties combined have about 6 million people.

People should get out now, Florida Gov. Rick Scott warned at a Thursday news conference. If they wait until Saturday or Sunday, when high winds and rain are expected to lash south Florida, it will be too late.

"We cannot save you when the storm starts," Scott said. "So if you are in an evacuation zone and you need help, you need to tell us now."

"You do not want to leave on Saturday, driving through Florida with tropical storm force winds," CNN meteorologist Tom Sater said. He said the latest Floridians should evacuate is Friday morning.

Though nobody knows exactly where Irma will make landfall, the governors of Georgia and South Carolina decided not to take any chances. They ordered mandatory evacuations of low-lying coastal areas around Savannah and Charleston.

Other eastern Florida population centers could also see similar evacuations soon, depending on the path of the hurricane, which is expected to near Miami on Sunday.

"Look at the size of this storm," Scott said Thursday. "It is wider than our entire state and could cause major and life-threatening impacts from coast to coast. Regardless of what coast you live on, be prepared to evacuate. Floridians on the west coast cannot be complacent."

Fuel availability is a major problem. CNN's Miguel Marquez said about half the gas stations were open in Miami.

At a Marathon gas station in Miami, a line of cars wrapped around the corner. Two police officers on duty kept drivers in line and police tape kept them from entering the station the wrong way. Drivers had to wait at least an hour for fuel.

In a news release, Scott said state police will escort fuel trucks heading to gas stations on evacuation routes. Contractors have come up with 1.5 million gallons to deliver so far, he said.

About 300,000 barrels of fuel were being unloaded from a ship in Tampa to resupply gas stations. A fuel ship from Mississippi was heading to the Port of Tampa and will be given a military escort, he said.

One issue with a mass evacuation is that Florida relies on two primary highways that go north and south: I-95 along the east coast and I-75 further west. Those highways, as well as the Florida Turnpike, US-27 and other smaller roads that run north, will be "tremendously" clogged if the storm hits, Sen. Bill Nelson of Florida said.

"If this monster comes right up the peninsula of Florida, you're gonna have a mass out-migration from the south to the north, and it's gonna clog the roads something tremendously," Nelson said. "Therefore, if you are going to evacuate, once the evacuation order is given, don't wait around."

An evacuation could lead to mileslong gridlock, as happened with attempted mass evacuations during Hurricane Floyd in 1999 and Hurricane Rita in 2005.

When Hurricane Harvey began threatening southeast Texas about two weeks ago, Houston officials decided not to issue voluntary or mandatory evacuations, partly because of memories of those problems.

Hurricane Irma's cone of potential landfall currently includes the entire state of Florida, meaning that residents may not be able to flee to the state's Gulf Coast to avoid its wrath. Going north is the best choice.

For comparison, tropical storm-force winds from Irma cover over 65,000 square miles -- about the size of the entire state.

Major evacuations have created significant problems in the past when millions of residents took the roads at the same time.

Florida saw this in 1999 during Hurricane Floyd. The storm was headed toward Jacksonville, in the northeast corner of the state, and officials there ordered evacuations. The storm ultimately turned farther north and made landfall in North Carolina.

In all, about 3 million people across Florida, Georgia, South Carolina and North Carolina attempted to evacuate, making it the largest evacuation effort in US history, according to a FEMA press release from 2000.

Many of those evacuees became stuck in gridlock in what FEMA charitably described as a "frustrating effort."

Mindful of past problems with mass evacuations, Houston officials last month told residents to hunker down in their homes until Hurricane Harvey passed. As the city flooded and residents became trapped in their waterlogged homes, Houston mayor Sylvester Turner defended his decision not to evacuate.

The alternative, he said, could have been worse.

"You literally cannot put 6.5 million people on the road," Turner said last week. "If you think the situation right now is bad, you give an order to evacuate, you are creating a nightmare."

During that evacuation, a bus carrying elderly evacuees caught fire and exploded, killing at least 24 people and jamming a major evacuation route. Others died during the evacuation due to heat exhaustion, according to the National Hurricane Center.

For Floridians who don't want to risk chaos on the highways, a flight out is another option.

Delta Air Lines said it has added flights out of Miami, Fort Lauderdale and Key West to Atlanta, its largest hub. The airline also is allowing passengers affected by Irma to rebook flights without paying a fee.

American Airlines and United Airlines also said they are waiving change fees for passengers whose travel plans are impacted by Irma.

However, American Airlines said it will wind down operations Friday afternoon at its Miami hub as well as other south Florida cities. Operations will be canceled throughout the weekend, the airline said.