Footprints lead police to suspect stuck up a tree 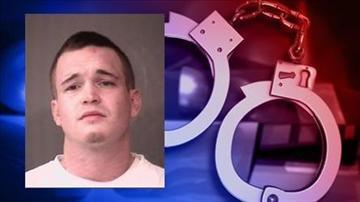 KOSCIUSKO COUNTY, Ind. – A fleeing suspect who tried to hide up a tree had to be rescued by the Leesburg Fire Department when his knee got lodged in the tree, according to Warsaw City Police.

On Saturday a Warsaw Police Officer was investigating a criminal mischief complaint in the 800 block of North Park Avenue around 3:30 a.m, when a silver Chrysler 200 came speeding out of Lucerne Park without its lights on.

The driver led police on a 15 mile chase that reached speeds of upward of 100 miles per hour, according to police.

"It was snowing at the time. The officer had a hard time seeing him and keeping up with him," said Lieutenant Kip Shuter of the Warsaw City Police Department.

The Warsaw Police Officer caught up with the vehicle when it collided with a tree in the 6700 block of CR 600 North near Atwood.

"By the time he got up to the car, the driver had already fled outside of the car. But three other occupants were still in the car,” said Shuter.

The officer called for back up and a Winona Lake Police K9 followed a set of shoe prints in the snow leading from the driver’s side of the car to a wooded area about a mile from the vehicle.

Around 4:30 a.m. Police tracked the driver to a tree where he was stuck about 8-feet in the air with his knee lodged in the tree.

Neibert was taken to the hospital for treatment. While there, police also obtained a warrant for a blood draw.

After he was treated, Neibert was taken to the Kosciusko County Jail on charges of resisting arrest with a vehicle, fleeing law enforcement, and criminal recklessness.

Lieutenant Shuter said Neibert could face a charge of Operating While Intoxicated (OWI) if his blood results come back showing his alcohol level was above the legal limit.

The other occupants of the vehicle were taken into custody and later released without charges.

Belinda Slone and her husband who live next door to where the collision occured said the fire department ended up cutting down the tree with a chainsaw to free Neibert.

Lieutenant Shuter said he could not confirm or deny those accounts because he was not at the scene of the incident and the officers who were at the scene work the midnight shift, so they were not available for comment this afternoon.

According to Lieutenant Shuter, Neibert has prior brushes with the law. Today his bond was denied by a Kosciusko County Judge.