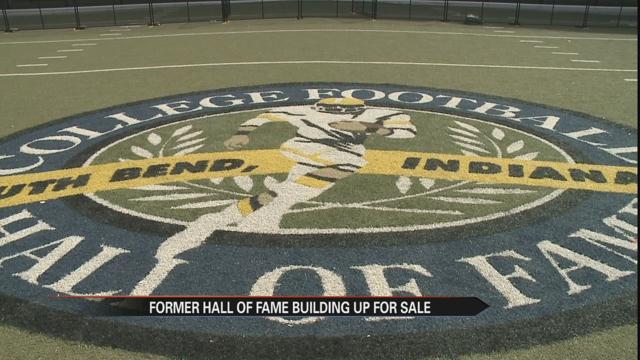 Wednesday morning the city of South Bend announced it will sell and repurpose the former College Football Hall of Fame into a hotel lobby, that will accompany a brand new full service hotel in the works.

The city said this development will bring dozens of jobs to the area and millions in revenue over the next several years.

“To see that that great building, that great structure, that great site is going to come back online is just terrific news for the city of South Bend, for the economy, for the community. And I can't wait to cut that ribbon in 2017,” Mayor Pete Buttigieg said.

JSK Development, a local hotel development and management company with 30 years of experience will transform the now vacant building into a busy hotel lobby and restaurant.

Developers said the gridiron located behind the Hall of Fame will be accessible to the public a minimum of 30 times a year.

And the property next to the former Hall of Fame, which now serves as a parking lot on the southwest corner of St. Joseph and Jefferson, will be developed into a full service 120 room flagship hotel.

“We want to do something nice and upscale,” JSK Development President and CEO AJ Patel said.

“We will certainly benefit from having another hotel. Even the other hotel that's already there will benefit because we have a lot of conventions that say hey we'd love to be in South Bend but you just don't have enough hotel rooms that are connected to the Century Center,” Buttigieg explained.

The demand, they said, stretches beyond football season and conventions.

“The demand for hotel space downtown where the amenities are walk able has always been high,” said  Chris Field, Assistant Director of Community Investment.

So what took the city so long?

“This wasn't easy. And when we had that announcement and that first indication in 2009 that the hall was going to be leaving, a lot of the future of South Bend was in doubt. We were in a deep economic recession. And we hadn't seen the momentum that we now have,” said Buttigieg.

JSK said the Smart Streets initiative and the history of South Bend were the main draws to invest here.

“I think the main thing was the history of the Hall of Fame being here. When you say Hall of Fame people know what that is. So by putting a hotel and tying that history to a brand new hotel, people are going to say hey I want to stay there,” Patel explained.

JSK will invest $10 to $12 million to develop this project.

The city of South Bend currently owes $3.5 million towards the former Hall of Fame.

The city will sell the Hall of Fame for a $1.2 million to JSK.

And taxpayers will pay the remaining debt of $2.3 million over the next two years.

Construction is set to begin next year.

Developers say the hotel will open in the first quarter of 2017.