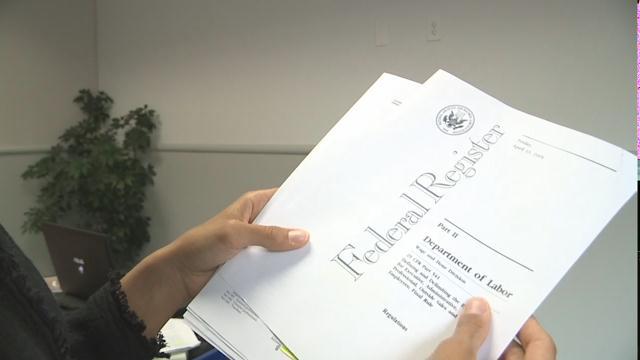 A former Elkhart employee is suing the city because he says they owe him back pay. Chad Dyer worked for the city of Elkhart and was paid as a salaried employee and exempt from overtime pay. Taking a closer look at the Fair Labor Standards Act, his lawyer says he was entitled to more money. Dyer adds others could be too.

“Under federal law they owe us overtime,” says Dyer.

For five years, Dyer worked for the city of Elkhart in the Police, Fire and Communications Department as an Information Technology Network Administrator.

Dyer says after the first six months a coworker pointed out what he thought was a mistake.

“He brought to my attention that we were not getting paid according to federal law,” says Dyer.

“We just make it work. We keep it running. That's all we do and so in the law it basically says unless you are designing these systems or creating software you are not an exempt employee, according to federal law,” says Dyer.

Dyer adds because he was always on call to fix, and not design, network systems, that made him eligible for overtime.

Dyer brought up the issue with the Human Resources head of Elkhart.

“First I was suspended for insubordination of a director or manager. I felt like I was singled out as far as because I brought up a problem that they really didn't want to correct and then I was terminated,” said Dyer.

Dyer is concerned others may be in a similar situation he faced and not even realize it.

“Maybe now it's time to do something because now there is more than one person involved in this,” says Dyer.

Dyer filed the lawsuit in June of 2010. He is asking for the back overtime pay. Dyer says he and the city have not been able to reach an agreement over the past five years.

The city attorney says the litigation is ongoing and would not talk about the case.
Share this article: