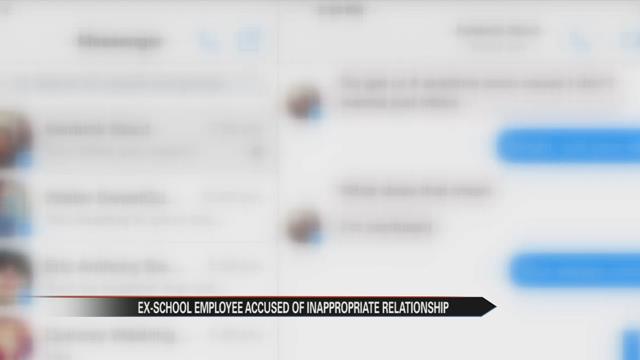 Stout was employed at Memorial High School in the food services department for about two weeks but held various positions with the school district for years.

According to court documents, on May 13th a 16-year-old girl admitted to having inappropriate conversations with Stout, after she says her Facebook page had been hacked.

Two days later, Stout was then suspended with pay by Elkhart Community Schools and by the end of the month Stout resigned.

“Thousands of our employees manage to meet the expectations on a daily basis. Sadly, he was not capable of doing so,” says Thorne.

In June, Stout admitted to sending sexual messages, nude pictures, and videos of sex acts to the teen.

“Social media posts that we had seen that triggered concerns that perhaps he had been involved in some inappropriate conduct,” says Thorne.

Screen shots of Stout’s conversation show overtly sexual conversations held between him and the teen. The district says it holds strong professional boundary policies that extend to social media interaction between students and faculty.

“We have a social media policy for example that says employees should not be communicating with children over social media unless a parent is aware of it and has consented to it,” says Thorne.

In the screen shots of a social media conversation Stout asks to sneak into the young girl’s bedroom and the minor responds “how naughty do you think I am?”

“He didn’t comply with the terms of either one of those policies and that led us down the trail we were headed down,” says Thorne.

The district says there weren’t any red flags that could have prevented this.

“He didn’t have anything that would have prevented us from hiring him on his background check,” says Thorne.

Stout was arrested Thursday morning and will be in court on Friday.

Thorne says the school district is not investigating any other possible inappropriate relationship Stout had with students. He adds they are leaving that in the hands of law enforcement and the prosecutor’s office.