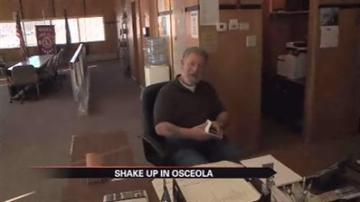 So we reached out to see if it was true.

"We instructed that if we did not sign that, that they would have a board meeting, and recommend we be terminated," Ryan Deal, former Chief of the Osceola Fire Department, said.

Town officials said they wanted a change; that meant -- eliminating some of the station's most experienced volunteers.

Of the 12 firefighters remaining, five are not trained as EMTs, which could leave residents in need of emergency medical help in trouble.

"These are simple certifications that help save lives," Les Cornelison, Osceola's former Fire Chief from 2007, said.

He headed the department before fired Ryan Deal took over.

He said problems with broken equipment and ill-equipped volunteers has been an ongoing issue for years.

He quit the department because town officials made improvements and progress nearly impossible.

"The payment is nothing. They don't want the money," Cornelison said. "They just want to be able to do their job, and go home at night. And this town board, they don't understand that."