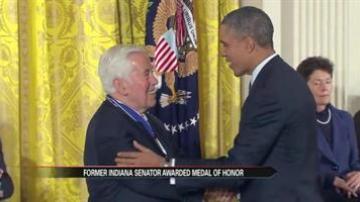 WASHINGTON D.C. -- A former long-time U.S. Senator who represented Indiana on the hill was back in Washington Wednesday to receive a big honor.

Dick Lugar was one of 16 people who received the Medal of Freedom, the nation's highest honor for civilians.

The 81-year-old  was honored for his leadership on international security issues and for his work reducing the threat of nuclear weapons.