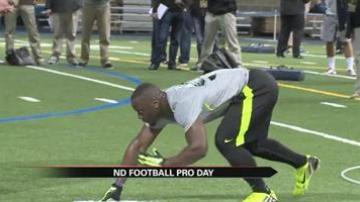 The former players have been training for pro day for several months.

"A lot of throwing, a lot of different footwork stuff, that's a little different than we did here, so it was a great couple of months and I'm excited about the future," said Tommy Rees, former Irish quarterback.

All that training was put to the test Thursday.

"I hope a couple coaches smiled when I did drills, I hope they like my thighs and my footwork and my hips because I've been trying to work on and get them flexible and be able to move around," said Louis Nix III, former Irish nose tackle.

All the players can do is hope the coaches liked what they saw.

"It doesn't matter what I think, it's what they think and they gave me a lot of good feedback so I think I did good," said Prince Shembo, former defensive linebacker.

Former team captain Zack Martin says despite the fact that his future depended on his performance, pro day is a lot like game day at Notre Dame.

"When you get back here with all of the guys, it's really just like being at practice with all of them and instead of 80,000 there's just a couple hundred standing around so it really wasn't much different," said Martin.

All that's left now is to wait for draft day.

"I'll just be waiting for a call, see what happens and just take it one day at a time," said Rees.