Former Marine back on US soil 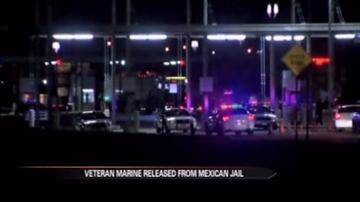 BROWNSVILLE, Tx. — A former Marine imprisioned in Mexico is back in the United States just in time for the holidays.

Jon Hammer crossed into the United States a free man on Friday night.

People eager to see him waved flags near the border at Brownsville, Texas.

The 27-year-old was carrying his great-grandfather's shotgun and told authorities what he was carrying when he crossed into Mexico more than four months ago.

Despite declaring the weapon, Mexican authorities still put him in prison.

"He's innocent. We've always said it and the Mexican system has proved it," said Hammer's attorney Eddie Varon. "However, I believe and in the next days you will see that there should be some modification to laws and things because this should not have happened."

Local officials teamed up to urge the State Department to help get Hammer released from the detention center.

U.S. officials strongly discourage citizens from crossing the border with any type of firearm.