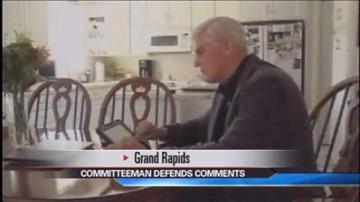 GRAND RAPIDS, Mich. — One Michigan political figure is under fire for what he posted on Facebook.

Dave Agema posted a link to an article written by a medical doctor who wrote that the homosexual lifestyle was "filthy."

The former Michigan lawmaker said there's a reason why he's taking his stance on same-sex marriage.

He said he posted the article to ask party members to reaffirm their beliefs about marriage.