Former Rep. Weiner may be gearing up for mayor run in NYC 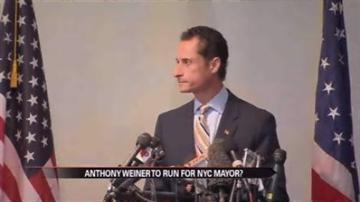 NEW YORK — Former New York Congressman Anthony Weiner might be gearing up for another run for political office.

Should he decide to run, Weiner will have nearly $4.5 million on hand.

Some people believe that it is a start for a mayoral run in New York City.

Weiner was forced to resign from office following a sexting scandal back in 2011.