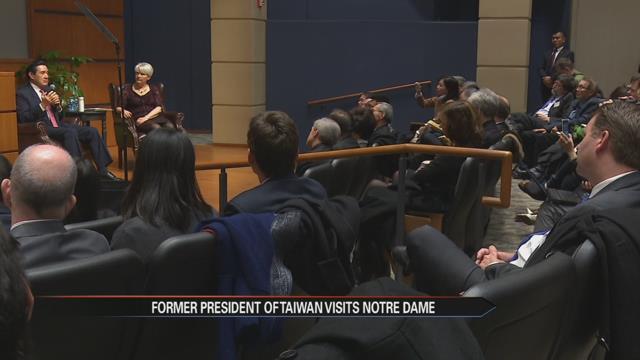 Another world leader makes a stop in Michiana for an intimate conversation at Notre Dame.

Sunday, the campus welcomed former President of Taiwan Ma Ying-Jeou as he talked foreign relations and politics here in America.

The university’s president welcomed the former president and he received nothing but Hoosier hospitality from the campus.

He spent most of his time unpacking years of memories as the head of the Taiwanese nation.

He also entertained questions from the audience.

The most commonly asked question to the former president was what were his thoughts on U.S. president-elect Donald Trump?

While he believes Trump would maintain Taiwan relations, he hopes the president-elect won’t follow too closely to the remarks he made during his campaign.

“We in Taiwan, as I said, certainly hope that there are some changes in the policy of Mr. Trump after he becomes president,” he said.