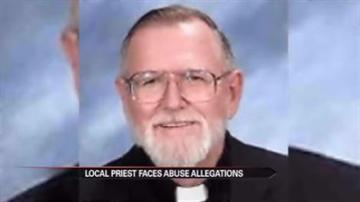 Father Cornelius Ryan is accused of sexual assault against a minor.

This scrolling sign on the little flower catholic church in south bend shows the church’s stance on child abuse, ironically that is exactly what one of the church’s former priests was fired for.

According to this statement put out by the holy cross congregation, the 76-year-old priest is accused of sexually assaulting a minor, 20 years ago while he was doing ministry work in Africa.

I talked to the diocese representative Sean McBride on the phone.  He had this to say about the allegations…

The diocese was notified of these sexual allegations from by the congregation of the Holy Cross.

“Bishop Rhoades was notified by father Tom O’Hara the superior of the Holy Cross,” said McBride.

Father Ryan has been removed from his current parish and the diocese is working on damage control.

“This entire week we have had grief counselors on site every day and a priest in there to help celebrate mass this weekend,” said McBride.

McBride says he does not know whether this alleged sexual abuse happened more than once but says no other allegations have been reported against Father Ryan and they encourage open communication among all people with allegations this serious.

“If that individual has been abused by a priest or a deacon, they should first contact the authorities and then contact us because we want to help,” said McBride.

McBride also says unlike what it appears in the media, sexual abuse by Catholic Church leaders is not common.  It is less than one percent worldwide, however McBride says even one person is one person too many and the church is working hard to combat this issue.