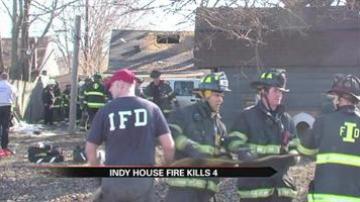 INDIANAPOLIS, Ind. --- Four people were killed and two others were injured in a house fire in Indianapolis over the weekend.

Fire officials said that someone on the interstate saw the smoke and called for help Saturday morning.

47-year-old Leo Guerra, his wife and two of their children died at the hospital.

Their 14-year-old daughter and six-year-old son were critically injured.

"This is probably one of the most tragic situations we've ever encountered," said Rita Reith Captain of the Indianapolis Fire Department.

Fire investigators said that the three bedroom home had no working smoke detectors.