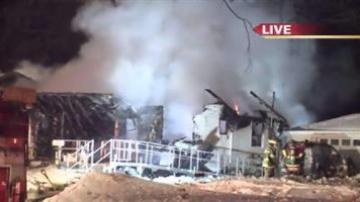 According to the Michigan State Police, a person driving by 204 N. Elm Street in Three Oaks Village spotted flames coming from the home.

He stopped, called 9-1-1 and honked his horn to try to get the attention of the residents or neighbors.

When no one came out, he tried to go into the house, but the flames and heat were too intense.

Once the fire departments were able to get into the home, they discovered four bodies. Two in the living room and two in a bedroom. A dog and three cats also died in the fire.

The victims' identities are expected to be released on Friday but family members say two of the victims are 19-year-old Kyle Tyler and 20-year old Ana Peek.

"I mean he had such a big heart, I can't believe he's gone," said Kyle's sister Heather Tyler. "He was such a sweet kid, Ana too. The two of them, they met in high school and they had been together ever since."

Family members say Kyle spent the night with Ana at her grandparents' house.

"It's just so tragic. One night staying the night at someone else's house and everything is lost," said Michael Fadder, Kyle Tyler's brother in law.

"Upon our arrival the house was completely engulfed in flames. At that point we just established a command and started fighting it," said Mike Young, Three Oaks Fire Assistant Chief.

But for the people trapped inside it was too late. Fadder says Kyle's mom is beside herself.

"The hardest part is not knowing. Knowing that that's your child but they won't let you see him. She wanted to see him and she can't do that," said Fadder.

Michigan State Police have taken over this investigation.

They say nothing looks suspicious about this fire, but the house did not have working smoke detectors.