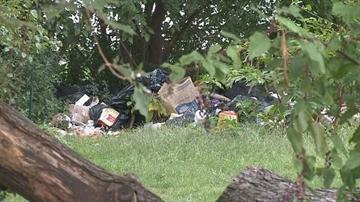 SOUTH BEND, Ind. – For months Lorraine Harper has been complaining about an illegal trash dump in the yard behind her home. For months it has sat there, and grown.

Harper says she started by calling South Bend’s Code Enforcement office, then she called the Mayor’s office. When she saw no progress in cleaning up the mess, ABC 57 was contacted. “Everyone else has turned a deaf ear,” said Harper. “All I’ve heard from the mayor’s office was, ‘oh they’re going to be out. They’re coming out,’ and it’s just frustrating, and it’s disheartening,” said Harper.

Dozens of bags of trash litter the area. Some have sat there since May; other bags have arrived more recently. The only thing keeping the stench from the rotting pile of trash from overwhelming the surrounding homes is the cool weather.

Meanwhile, animals have torn into the plastic bags to get to the scraps of food inside. Litter has spread from the gaping wounds in the sides of the trash bags.

Harper is concerned scavenger animals, like raccoons, will be attracted by the debris and then try to take up residence in her garage nearby.

In order to try and figure out who the trash belongs to, ABC did a little digging. Several pieces of mail were found inside bags of trash on the pile. An envelope sent via UPS was addressed to 701 Huey Street, and a prescription for pharmaceutical drugs from Memorial hospital was also addressed to a resident living at that address.

A credit card receipt was found in one bag with the same name as a piece of mail found in another. The mail was addressed to someone living at 714 North Elmer St.

When I contacted the people living in the home at 714 North Elmer, I was told the person that mail was addressed to was in the hospital and the people inside the home were just house sitting for them.

Neighbors think they were lying. Either way, the residents at 714 North Elmer deny putting their garbage on the pile.

No one has seen someone actually leaving bags of trash on the illegal dumping site, and another neighbor tells ABC 57 trash bins are stolen on a regular basis.

Harper says, that shouldn’t be an excuse for the city not to take action on the mess behind her home. The situation has reached a point where Harper thinks the city is intentionally ignoring the problems on the west side of town. “We don’t want to live like this. You don’t want to pay taxes and call and try and get something done about situation like this, and nothing gets done,” said Harper.

ABC 57 intends to contact the city about the situation to see what sort of resolution to the problem they are working on, and when it will completed.
Share this article: