Four shot at The Oaks in St. Joseph County 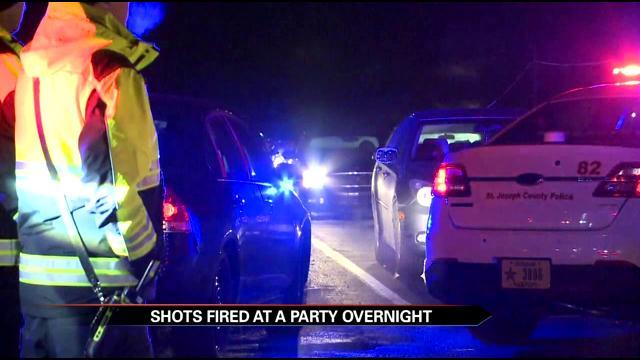 Hundreds of people fled The Oaks at South Paw Farms around 2 a.m. Sunday when shots were fired.

A St. Joseph County Police Officer was conducting a traffic stop in the area when he heard several shots ring out. Police say over 500 party goers were located at The Oaks on Roosevelt Road at the time of the shooting.

Four people were shot and three were taken to the hospital with non-life threatening injuries.

The fourth victim fled the ambulance while being treated, but could not be located after an extensive search.

Officials from multiple police agencies, including Indiana State Police and Mishawaka Police were on the scene and set up two check points surrounding The Oaks.

“It was a rather chaotic scene when the officers first responded. Again hundreds of vehicles hundreds of people and they were just trying to control that as best they could. We do have a fourth victim who began getting treated and then he fled from the ambulance. So again we are trying to figure out whether or not he left the scene in a vehicle or if he is still somewhere in the area,” said Lieutenant Matt Blank of St. Joseph County Police.

Investigators are continuing to gather evidence and conduct interviews in order to determine the sequence of events. No arrests have been made as of yet.

The Oaks issued the following statement:

The Oaks at South Paw Farm is a highly respected, faith-based country venue used primarily by churches and youth groups for camps and special events. The facility's natural beauty also makes it a popular venue for weddings and corporate retreats.

Rental requires a careful application process, including a stipulation by renters that no alcohol or firearms will be brought onto the campus. The organization's administration is committed to maintaining the highest standards of family-friendliness and safety.

The incident of 12.07.14, while unfortunate, is an anomaly, historically unprecedented. We are extremely grateful that no one was seriously injured, and we are taking decisive steps to mitigate any possibility of a similar incident in the future. We are also very grateful for the professional and competent response of the police surrounding the event.