Freddie Gray witness: 'What the (expletive) did you guys do?' 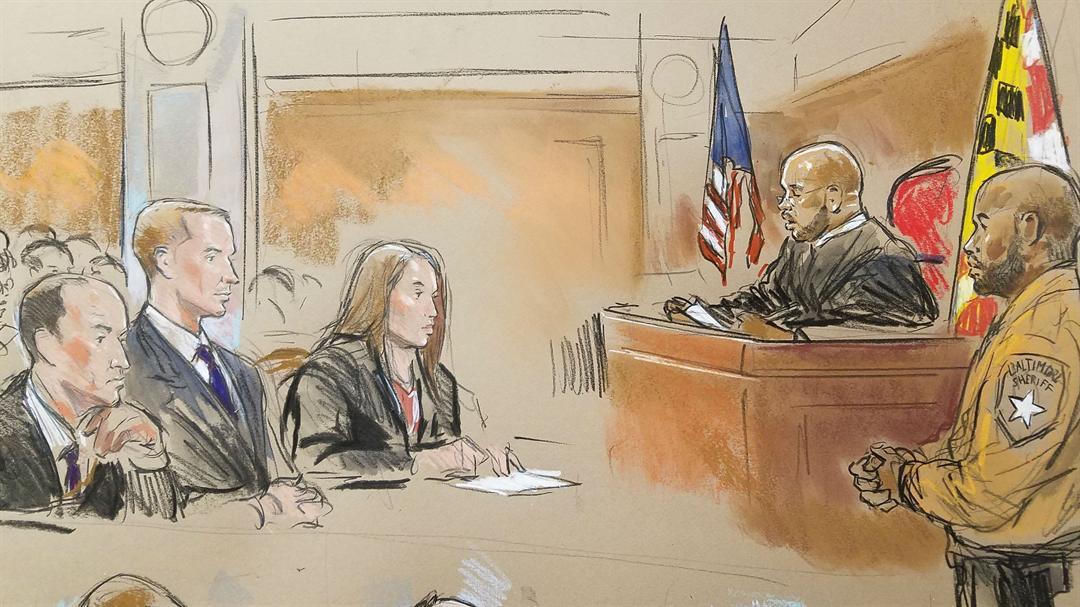 By Steve Visser and Lawrence Crook

(CNN) - Caesar Goodson, the Baltimore police officer facing the most serious charges in the death of Freddie Gray, gets a chance to present his case, after prosecutors rested theirs on Wednesday.

The last day of the state's case included testimony from a paramedic who said to the officers encircling the collapsed Gray, "What the (expletive) did you guys do?"

The paramedic, Angelique Herbert, a 13-year veteran of Baltimore Fire Department, testified that when she responded to the Western District police station on April 12, 2015, she found two officers attempting to hold up Gray's head as he was kneeling with unblinking eyes.

She quickly determined he wasn't breathing and performed CPR.

Herbert testified that the officers didn't say much and gave various reasons for Gray's condition: One suggested Gray banged his head against the van, another suggested an overdose, the other officers shrugged, she testified.

Goodson, the third officer to go on trial, faces a charge of depraved-heart murder, Gray died from a spinal injury after he was arrested and placed in a prisoner van driven by Goodson.

Gray's death ignited a wave of protests as debate surged nationwide over whether police use excessive force, particularly against African-Americans.

Prosecutors contend Goodson took the unbelted Gray on a "rough ride," which was described as a punitive measure police used against unruly subjects.

They contend Goodson drove so radically that he blew through a stop sign and veered into another lane of traffic because of the speed he was traveling, which they said would have tossed Gray around in the van.

Previously, Dr. Carol Allan, the assistant state medical examiner, testified "with a reasonable degree of medical certainty" that the fatal spinal cord injury Gray suffered was distinctive, that it could only happen in a certain way and that it occurred while he was in the van.

Wednesday, prosecutors called Stanford O'Neill Franklin, who spent 23 years with the Maryland State Police and several years with the Baltimore police, as an expert on prisoner transport.

Franklin testified normal procedures would have required Gray to be belted in the van unless there was a danger to officers, which a cellphone video of the event did not suggest was the case.

Gray was cuffed and his legs shackled, which Franklin said would make the unbelted man unstable and therefore vulnerable.

Franklin and Herbert were among the last of 22 witnesses who prosecutors called over five days.

On Monday, Baltimore police Officer William Porter testified Goodson had custody of Gray while Gray was inside the police wagon, and therefore was responsible for him. Porter was the first officer of the six officers charged to be tried in the case, but his trial ended in a mistrial in December when the jury couldn't reach a unanimous decision.

After the prosecution rested Wednesday, defense lawyers called two witnesses in an attempt to undermine Allan's testimony that the death was a homicide, not an accident. Both were doctors, and one was a former medical examiner who gave differing opinions on the manner and cause of Gray's death.

Judge to rule whether case can continue

Judge Barry Williams is expected to rule on a defense motion for acquittal on Monday, when the defense is scheduled to continue calling witnesses.

So far the state is 0-2 in prosecutions. Porter faces retrial in September, and on May 23, Williams issued a verdict of acquittal for Officer Edward Nero during a bench trial, in which the judge heard the evidence and not a jury.

The judge also ruled the state did not prove Nero was guilty of reckless endangerment in the failure to put a seat belt on Gray.

After the acquittal, Goodson also chose to have a bench trial rather than a jury trial.

Nero's acquittal prompted much outrage on social media, although the Gray family attorney issued a statement that said the family applauded the judge for ruling on facts instead of bending to public pressure.

Lt. Gene Ryan, president of the Fraternal Order of Police Lodge No. 3, accused State's Attorney Marilyn Mosby of leveling charges against five officers not as the product of a "meaningful investigation," but as a response to riots in the city after Gray's death.

Defense lawyers contend Gray's injuries were caused in part by his own agitation and thrashing around in the van. They contend the medical examiner initially called the death a "freakish accident."

Prosecutors have said Gray complained of having trouble breathing and asked for medical help as he was driven in a police van. When he arrived at a police substation, he was unconscious.

A week later, Gray died at a hospital from a spinal injury.