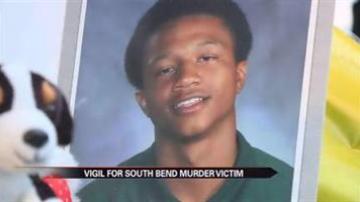 Johnson was shot Sunday morning by a stray bullet on the city's West Side.

"You just never thought that something like that would happen to someone like him," said Markice Walker, a friend of Johnson's.

Walker said Johnson was a funny and outgoing person.

He still can't believe what happened, and said the bullet that took his friend's life was unfair.

"He didn't deserve what happened to him," said Walker. "He was supposed to have a long-living life."

Johnson's Aunt Martika Binion is hurt by the news of her nephew. She loved Jhaelon like he was her own, and said she'll miss him dearly.

"Jhaelon died young for a reason," said Binion. "That reason being to wake up South Bend, because he touched way too many lives."

Binion hopes people use Jhaelon's death as an example on how big of an impact violence can have on a community.

Nearly 100 people showed up to his vigil.

She said even if one person who attended changes their ways, it was worth it.