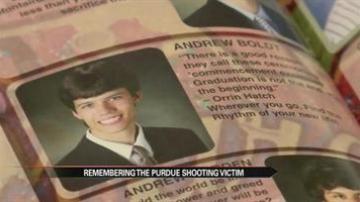 Friends of Purdue shooting victim Andrew Boldt are heartbroken over his death and cannot imagine why someone would do this to him. Boldt attended Marquette High School in Wisconsin. One of his former teachers and a former teammate remember him fondly.

Jean Morrell couldn't manage words, only tears when she got the news that her former student Andrew Boldt had been shot to death on Purdue University's campus.

He was allegedly shot by 23-year-old Cody Cousins who is also a Purdue Student.

Morrell taught Boldt calculus for two years. She says he was a model student.

"More interested in learning and questioning than he was in what grade am I getting," said Morrell.

Boldt's former track teammate Arthur Cameron says the tight knit all boys school they attended together is in mourning over the loss.

"We are all confused. We are shaken. We are broken by this," said Cameron.

Cameron had only positive memories of Boldt.

"He went out there just to have fun. He was just a great guy all around," said Cameron.

Funeral arrangements and visitation for Andrew Boldt are still being finalized.