Backlash to the #TakeAKnee protest grows 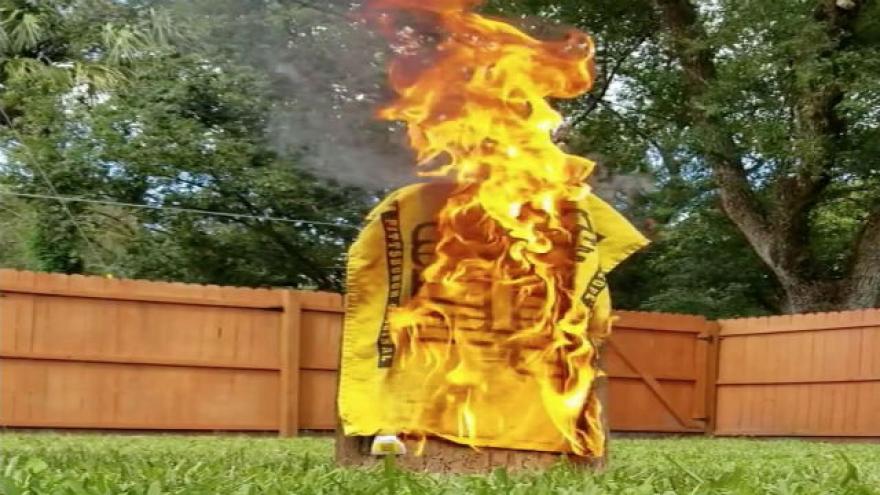 Some Pittsburgh Steelers fans reacted by burning their memorabilia after the team chose not to take the field during Sunday\'s game. Photo courtesy Brian Purdy/Facebook

(CNN) -- Reactions to NFL players taking a knee in football games since Sunday have been blowing up the Internet.

If Monday was filled with images of players and vets taking the knee, Tuesday brought numerous examples of the backlash to what has gone from an expression of protest to a divisive issue. Fans burned jerseys; clubs disinvited athletes and some government agencies also made headlines for their reaction. Here are some instances of the blowback to the athletes' protest:

The Krewe of Poseidon canceled the invitation for New Orleans Saints players Kenny Vaccaro and Alex Okafor after they sat for the National Anthem on Sunday, according to CNN affiliate WGNO. The players were going to be grand marshals in next year's Mardi Gras parade.

In Ohio, Geauga County Sheriff Scott Hildenbrand is prohibiting the county's deputies from working any off-duty details at NFL games, according to a Facebook post.

Hildenbrand said he attended the Cleveland Browns vs. Indianapolis Colts game on Sunday, where many players knelt while police officers and others in the stadium stood for "The Star-Spangled Banner." He mentioned that his uncle was a Vietnam veteran and that he felt "almost the entire league disrespected every veteran that ever fought or died for this country."

"If they do not have respect for us and our Country only bad things will come of that. We will not be a part of these activities," he wrote on Facebook.

Some NFL fans reacted directly to what their teams did this week during the anthem, some with reactions of the flammable kind.

An Indianapolis Colts fan burned his season tickets in a video he posted to Facebook on Monday.

Rodney Heard said he served in the Marine Corps and his grandfather was a WWII veteran. He said he thought about giving away the tickets or selling them, but that would just be filling the seats, so he "made his own sacrifice" by burning the tickets instead.

Some Steelers fans are taking to social media to show their disdain for most of the team sitting out the anthem on Sunday.

And some people filmed videos of themselves burning their once-prized Steelers swag to the soundtrack of frustrated feelings.

"If you disrespect our country I cannot support you," wrote self-described lifelong Pittsburgh Steelers fan Brian Purdy. He lit a Terrible Towel on fire on Sunday and posted it to Facebook, before deleting the post later.

Employee quits his job with a team

One man took it to another level; he says he quit his job to take a stand against #TakeAKnee.

Erich Nikischer, a New Era Field employee, declared he left his job Sunday after 30 years of working for the Buffalo Bills.

"I cannot work in a place where multi-millionaires cry that they are oppressed," he wrote on Facebook, before deleting his post on Monday.

WOW Cafe & Wingery of St. Bernard in Chalmette, Louisiana, posted on its Facebook page Sunday that it would not broadcast the New Orleans Saints game due to some local players choosing not to stand during the anthem.

One person commented, saying, "We chose to no longer spend our money on anything related to the NFL again, ever. However, we will be frequenting your restaurant. BRAVO."

Louisiana Lt. Gov. Billy Nungesser said he won't be attending the New Orleans Saints game versus the Miami Dolphins, which is taking place in London on Sunday.

Although he is in the UK city, he told The Times-Picayune on Tuesday that he won't be attending because, "I am disappointed in the NFL."

"I don't want to get into the battle of the statement they are making or why they are kneeling. I think it is disgraceful that anybody would use that as a time to protest," he told the newspaper on Tuesday.

Multiple Saints players sat on the bench or knelt, while others stood during the National Anthem on Sunday.

A fire chief in Pennsylvania apologized after using a racist slur to describe Mike Tomlin, the head coach of the Pittsburgh Steelers.

Paul Smith, the chief of Cecil Volunteer Fire Station #2, had posted a remark on Facebook: "Tomlin just added himself to the list of no good N*****s. Yes I said it," reported CNN affiliate KDKA in Pittsburgh.

The Steelers had stayed in the locker room during the National Anthem, with the exception of Alejandro Villanueva, on Sunday.

Smith, who was out of the country, told KDKA: "I was frustrated and angry at the Steelers not standing the anthem. This had nothing to do with my Fire Department. I regret what I said."

The township manager issued a statement announcing that Smith would no longer serve as the chief of the Muse Volunteer Fire Company, reported KDKA.