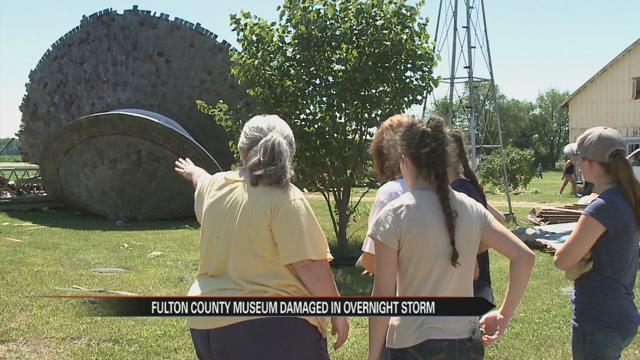 Many across the area woke up without power on Monday morning after a severe storm hit Michiana but a museum in Fulton County was without much more on Monday.

“I live here on the property and I thought ‘Oh, must be the winds are getting strong.’ Didn’t think too much about it,” said Melinda Clinger, Museum Director at Fulton County Historical Society.

But when the alarms at Clinger’s museum went off around 2 a.m. Monday, it didn’t take long for the fire department to discover a surreal scene.

“They showed their spotlight and I could tell at that point the roof was completely gone,” said Clinger.

Wagons over 130 years old were buried under wood and debris.

“It wasn’t until about 5:30 this morning when it was light enough that I came out to assess the rest of the damage," Clinger said. "We have several buildings that are actually damaged on the property and multiple trees down."

Volunteers, including friends, neighbors and board members from the Fulton County Historical Society helped to preserve what’s left.

“This time the roof is completely gone and three fourths of the walls. The last time it was just a small section of the wall,” said Clinger.

A tornado hit the museum’s previous round barn back in 1989.

Although she says the damage is much worse this time around, her spirits are high.

“We will rebuild the barn, too much history behind it to lose it,” said Clinger.