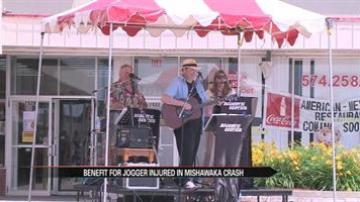 SOUTH BEND, Ind. -- Saturday, World Gym Fitness Center held a fundraiser for Tiffany Brantley who suffered serious injuries when she was hit by a car while jogging.

Brantley, 30, is still in Memorial Hospital after she was hit by an alleged drunk driver last month.

At the fundraiser, there was live music, activities, and good food.

But what really attracted people to the fundraiser was the person it was being held for, Tiffany Brantley.

Dozens of people showed up to show support for their friend.

“She is a fellow golf member of mine. Excellent game. Excellent golfer, and excellent athlete. I am just so hurt that this has happened to her she is a wonderful person,” Stevens said.

Brantley is in critical condition after she was hit by an alleged drunk driver while jogging near the intersection of Jefferson and Charlotte Street late last month.

“We’re broken hearted. It’s a horrible thing that happened to her, but she has a lot of faith and she serves a greater God, so she’s going to be great,” said MaryAnn Gast, a friend of Brantley’s and volunteer at the fundraiser.

Medical costs are growing fast, as doctors’ work to repair Brantley’s broken pelvis, leg, and back.

It prompted friends to sell baked goods and hold a silent auction to help with costs.

“Tiffany’s heart is big and she needs to know that people appreciate her and love her,” said Nicole McKee.