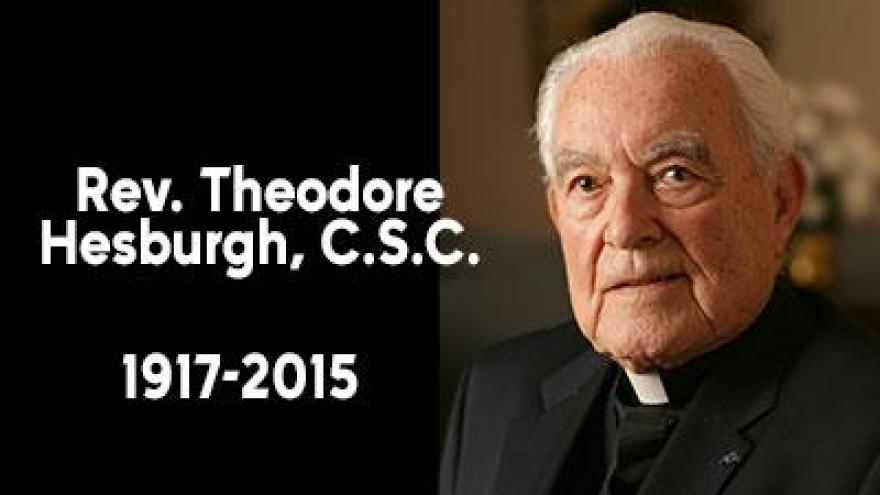 Visitation: Tuesday, March 3 at Noon (General public)
Visitation for Father Hesburgh will be open to everyone beginning at noon on Tuesday in the Basilica. It will continue until 6 p.m.

Wake: Tuesday, March 3, 7:30 p.m. (invitation only)
Rev. Edward A. Malloy, C.S.C., who succeeded Father Hesburgh as president, will preside and deliver the homily. The wake also will be streamed at Hesburgh.nd.edu

Visitation: Tuesday, March 3 at 9 p.m. (General public)
Visitation for Father Hesburgh will resume at 9 p.m.in the Basilica until 10 a.m. Wednesday.

Funeral mass: Wednesday at 2 p.m. (Private) Will air live on ABC57
A funeral Mass will be held for Father Hesburgh Wednesday at 2 p.m. in the Basilica of the Sacred Heart on Campus. Rev. Thomas O'Hara, C.S.C., provincial superior of the U.S. Province of the Congregation of Holy Cross, will preside, and Rev. John I. Jenkins, C.S.C., Notre Dame's president, will deliver the homily. The Mass will be for invited family, Holy Cross religious, University Trustees, administrators and select advisory council members, faculty, staff and students. It will be streamed at Hesburgh.ND.edu.

Tribute in celebration of Father Hesburgh: Wednesday 7:30 p.m. – 9 p.m. (General public) Will air live on CW25
A tribute in celebration of Father Hesburgh's remarkable life will take place from 7:30 to 9 p.m. Wednesday in Purcell Pavilion of the Joyce Center on campus. Speakers will reflect upon his contributions to the Catholic Church, higher education, the University and national and international affairs. Music will be provided by a variety of Notre Dame student groups.

The public also is invited to view the wake, funeral and tribute at the Compton Family Ice Arena on campus.