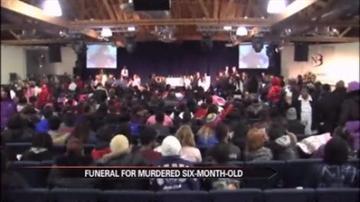 CHICAGO -- Family, friends and even complete strangers turned out for the funeral of a six-month-old girl shot to death last week in Chicago.

Hundreds turned out for the service just days after the little girl was killed in a drive-by shooting.

Police believe her father was the target.

The family's pastor says her father may make a public plea for information in the shooting sometime soon.

Meanwhile, police do not have any suspects.