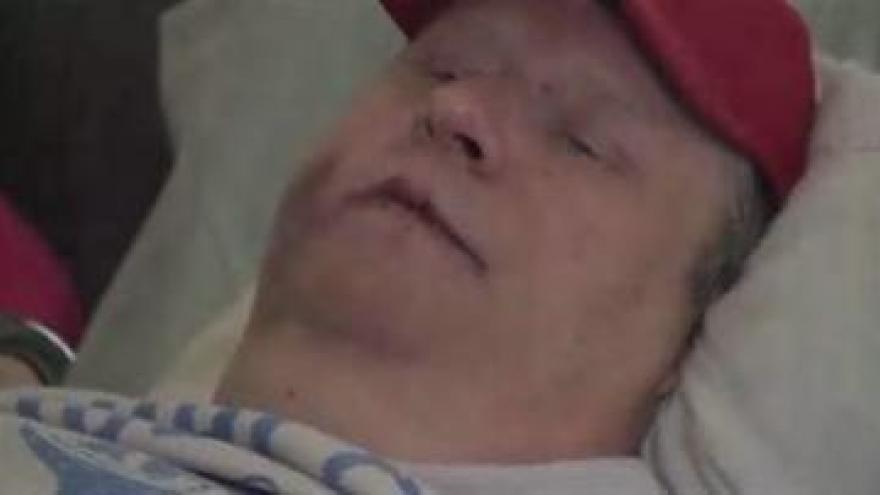 SOUTH BEND, Ind. -- A South Bend fungal meningitis patient is officially on the mend and out of the hospital after a 26-day stay.

“They turned my living room into, as you can see, a hospital room with a hospital bed,” said Pappy.

Pappy is thankful to be alive.

"I've never prayed so much in my entire life,” said Pappy.

"I was thinking he was dying,” said Jamie Pavlekovich, Pappy’s 12 year old daughter.

His family is happy to have him home as well, but they know he's not out of the woods yet. He is still suffering from fungal meningitis and is now having allergic reactions to Vorconazole, the prescription drug he has to take to get better.

"He hallucinates a lot. He was talking to his friend Swatty the other night,” said Tammy Pavlekovich, Pappy’s wife.

"I'm so in and out of it I can't remember one day from another to tell you the truth,” said Pappy.

The doctors have restricted the amount of liquid he can intake because of the drug he is on for recovery. If he goes over the limit, he could die.

"It bothers me to see my husband like this," said Tammy.

His oldest daughter Ashlee said, "I don't like to see him like this, it scares me a lot."

“Plain words I've been beat to heck," said Pappy. "This could have been avoided, there is no reason I should have missed a month of my children growing up."

A lot of their worries have turned to frustration at NECC, the pharmaceutical company that is allegedly responsible for his meningitis.

"I'm very upset. If I lost my dad words would not describe how angry I would be,” said Jamie.

Ashlee said, "They did this to him, all the bruising."

“I wish they would have checked their drugs more so this didn’t have to happen not only to my husband, but to other people as well especially the ones who have lost their loved ones,” said Tammy.

The Massachusetts pharmacy linked to the outbreak may have its license in Indiana suspended.

The Indiana Attorney General's Office says the New England Compounding Center agreed to an in-definite suspension of its license.

The Attorney General asked the State Board of Pharmacy to suspend the company’s license last week.

If the board accepts the agreement Monday the NECC won't be able to operate in the state.