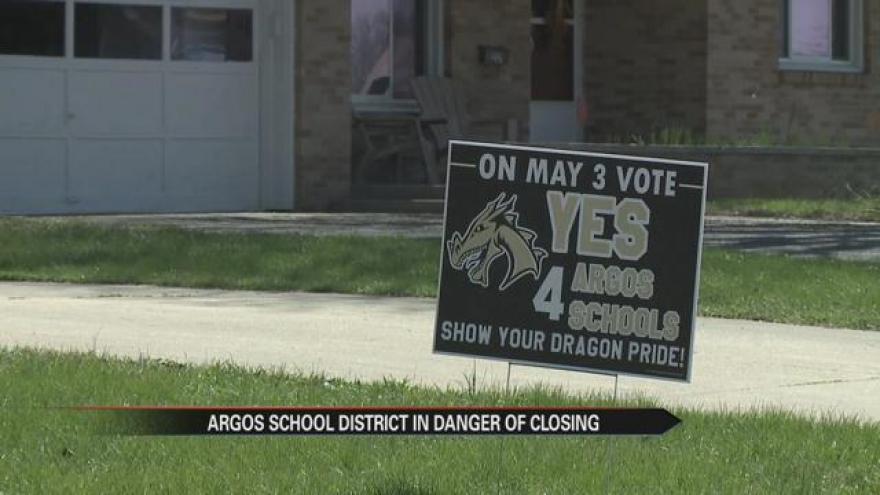 A Michiana school corporation is in danger of closing.

Due to declining enrollment and lack of funding Argos Community Schools said it barely brings in enough money to stay afloat.

On May 3rd, people living in the district will vote on a referendum for the school.

“From 2008 until now I’ve lost over $1,000,000. That’s a lot of money,” said Superintendent Michele Riise. Riise also serves as the Argos Elementary School Principal, since cutting that position to balance the budget.

These cutbacks are the result of a dramatic decrease in funding, several students transferring schools, and the districts inability to attract new students.

Each student within the Argos Community School Corporation brings in $5,700 per year.

“The board and I have a task ahead of us to cut $93,000. And I don’t know, when you do the math that’s three teachers or three programs. Now I’m getting to where I have to cut staff and that’s why the referendum is so important,” Riise explained.

The referendum will be on the ballot come May 3rd.

It is a seven year additional tax proposal for a maximum of 61 cents of a homeowners net assess value.

For example, the impact would be an additional $200 per year on a homestead property with an assessed value of $100,000.

If the majority of the near 2,000 people who live in the Argos School District vote no, the superintendent worries about what the future holds.

Several neighbors who live in the community have placed signs in their front yards to show support for the district.

The superintendent says if the referendum is not passed the school could close in the next few years.

If it is passed, the district would still work on a tight budget, but would be able to retain more students, teachers, and programs.