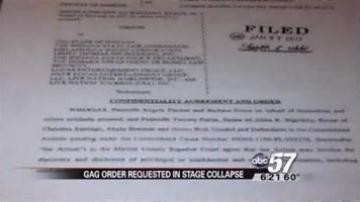 MARION COUNTY, Ind. -- There may soon be a gag order in the deadly State Fair stage collapse case.

Sugarland's attorney claims that Kenneth Allen, a lawyer for one of the victims, violated the rules of confidentiality by releasing a deposition tape to the media.

Allen argues that he didn't know the deposition was confidential, and was just responding to Sugarland's PR machine.

"There are defendants in this case that have hired spin masters and crisis managers and publicists and teams of them actually," said Kenneth Allen, the victim's attorney.

"I want to make sure that the kind of thing that happened in the past doesn't repeat itself," saod Bill Johnson, Sugarland's attorney.

A decision on the gag order is expected next week.