Gas company starting to shut off services for non-payment 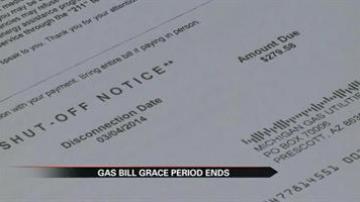 BENTON HARBOR, Mich. -- During the cold winter months, Michigan Gas Utilities chose not to turn off gas for residents who were unable to pay their bills. But the grace period is over and some residents face their gas getting shut off.

"My gas has been turned off before because my bill was so high. I live on a fixed income so it's hard. Because of that, my gas was shut off," said Benton Harbor resident Tracey Love.

Love says her bills are continuing to pile up.

She is on a fixed income and takes care of her 88-year old mother.

She says it was expensive to keep her home warm this winter.

"It seemed like it was triple the amount this month compared to last year. It was so cold that I had to keep turning the heat up and by the time the house heated up, it would get cold again because of the weather," said Love.

After several months of not paying her bill, she got a shut-off notice from Michigan Gas.

We spoke with Michigan Gas Utilities to find out what residents who are having a hard time paying their bills can do.

"As of April 1st, we started doing disconnections again for people who have not made any attempt to pay their bill or make any attempt to call and make arrangements for us," said Nick Krezeminski of Michigan Gas Utilities.

Joyce Kalenevitch, President of St. Joseph Conference of Saint Vincent de Paul, works one on one with hundreds of people to help them get their bills paid on time.

But the weather this year has driven bills up so high that even Saint Vincent de Paul can't afford all of it.

"People have been coming in after March 25 with very high bills - between $500-$800 and they just don't have the money. It's not that they don't want to - they can't," said Kalenevitch.

Love got help just in time from the Saint Vincent de Paul Society in Saint Joseph.