Gas leak happened on busy road as school let out 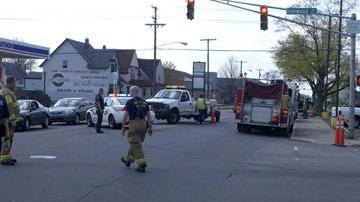 Busy Mishawaka Ave. and Ironwood were both closed as emergency crews rushed in.

Water hoses were quickly laid out in case the gas ignited, NISPCO workers rushed to get the pipe fixed.

Meanwhile, traffic was snarled through neighborhoods, students, confused about what were happening were just getting out at John Adams High school and foot traffic came to a stop.,

"I came out front, there were fire trucks, they had the street blcoked off, the library was evacauted, there was a fire truck, police cars all over by the new construction," Bianca Wright, who lives across from the gas leak said.

Construction was taking part at Ella Morris Conservatory. The greenhouse quickly filled up with natural gas.

"It was a very serious situation," Battalion Chief, Carol Buchanon said on the scene.

"You had kids just getting out of school, high traffic area, you gotta alot of vehicles, a lot of people that circulate through this area at this time of day."

"He claims they let him out of school and walked home and he said he basically walked right in to it. He didn't even know what was going on, so that concerned me," Wright said.

Wright said that she wished that more was done to make sure her son was safe.

"I would have liked for the school to buckle down until they had it taken care of because it wasn't that long till they had it under wraps."

School buses were rerouted down the other end of Mishawka Avenue at the time. Battalion Chief Buchanon said that he was contacted about the school in regards to the track meet, it was origionally cancelled and then allowed to take place. Buchanon didn't say if there was a conversation with administrators about what to do with the kids getting out of school at the time.

No one was injured during the gas leak. Ironwood was allowed to open back up first after about 45 min. Mishawaka Ave. opened up a short time later.

Several homes, Family Dollar and the Public Library were all evacauted during the emergency.

"I'm hoping thhey are a little more cautious aboutt hese under ground drillings and the work they are doing on the construction," said Wright.