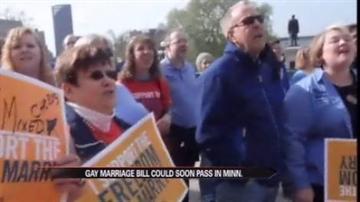 ST. PAUL, Minn. -- As early as Tuesday another state is set to legalize gay marriage.

Gay marriage supporters rallied around the state capitol in Minnesota. Supporters lined the steps with cut out hearts creating a path for lawmakers to enter the building before the vote.

The bill will now head to the governor who is expected to sign it Tuesday.

Minnesota could become the 12th state to recognize gay marriage.