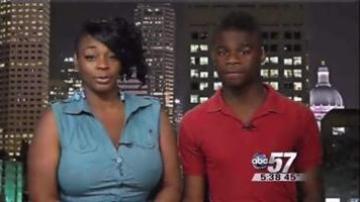 INDIANAPOLIS, Ind. -- An Indianapolis man is accused of bullying a gay teen inside of a mall.

This past weekend police say the man yelled homophobic slurs at a 17-year-old at Circle Centre Mall. They say he even got violent.

The teen, Darnell Young, was recently in the news for being suspended from his high school. His mother said he bought a stun gun to school so he could defend himself from kids who were picking on him.

According to a police report, 34-year-old Khyran Delay confronted the teen and even punched the boy in the eye.

He was arrested on a preliminary charge of battery with injury.