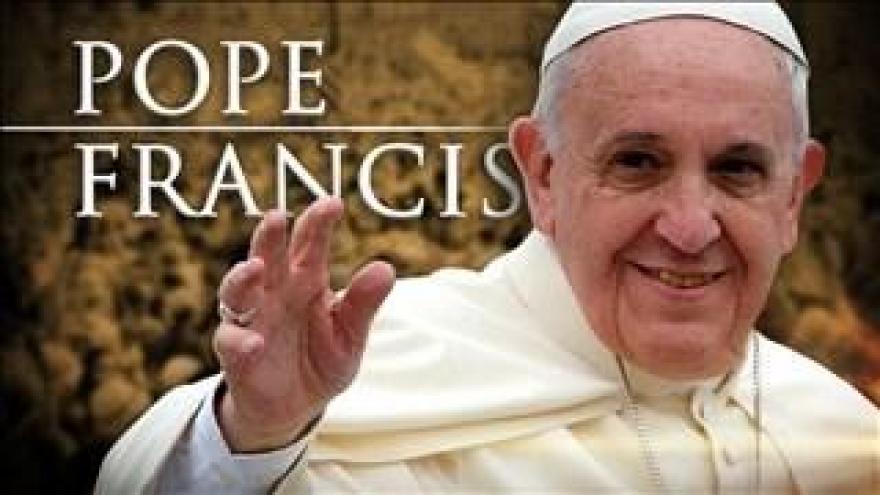 (CNN) -- Pope Francis used his Easter Sunday address to call for "reconciliation for the Holy Land," in an apparent reference to violence on the Israeli-Gaza border which killed at least 17 Palestinians and injured more than 1,400 on Friday.

Speaking to a crowd of thousands gathered at St. Peter's Basilica in Rome, Pope Francis said "the wounds of ongoing conflict" did not "spare the defenseless," according to the Vatican.

The Pope's comments come after a Palestinian march to the border with Israel on Friday turned into the deadliest day in Gaza since the 2014 war.

Thousands of Palestinians amassed near the border for the March of Return, in which the ultimate goal is to cross the border fence into land that became Israel seven decades ago.

But violence quickly broke out.

Israelis and Palestinians then blamed each other for Friday's violence.

David Keyes, spokesman for Israeli Prime Minister Benjamin Netanyahu, told CNN on Saturday that Hamas organized the violence. He said Israeli forces responded defensively because Hamas engineered the event to have thousands of people "to storm into Israel, to overrun Israel." He told CNN Saturday that calling it a protest is inaccurate.

"Bombs were placed, rockets were shot, guns were shot at Israelis. Israel did what any country around the world would have done. It defended its citizens," added Keyes.

Hamas spokesman Fawzi Barhoum said "the large crowds reflect the determination and will of the Palestinian people to extract the right of return and break the siege, no one can remove this right."

Mustafa Barghouti, founder of the Palestinian National Initiative, not affiliated with Hamas, told CNN on Saturday that the protesters were peaceful, likening their actions to followers of the Rev. Martin Luther King Jr. and Mahatma Gandhi.

"They did not use guns," he said, referring to the Palestinian protesters. "They did not use weapons. They were just trying to express their views in a peaceful manner and unfortunately they were shot by the Israeli army."

He also said protesters came from all over Gaza and were not just members of Hamas.

Palestinian activists released videos on social media that they say show protesters being targeted by the Israeli military.

The IDF warned Hamas published some of the videos "while others are edited or completely fabricated."The IDF also released their own videos of what they say shows various attempts at sabotage.

Saturday and Sunday saw much smaller crowds, and far fewer clashes between Palestinians and Israeli forces.

On Saturday, several hundred Palestinians marched toward the border fence.

A CNN crew near Khan Younis in southern Gaza saw some in the crowd throwing rocks and aiming slingshots toward Israeli forces positioned in the distance. A few tires were set on fire and rolled toward the soldiers.

Israeli soldiers responded with tear gas and the CNN team heard shots fired. It was not clear what type of weapons or ammunition the soldiers were using.

Smaller crowds gathered near the fence Sunday so there were few reports of violence.

Ten funerals took place across Gaza on Saturday for those killed the day before, including members of Hamas, the political and military group that governs the territory.

Hamas' military wing, al Qassam Brigades, released the names of five people identified as members of the group who were killed.

The Israeli military also released a statement on Saturday saying, "At least 10 known terrorists with documented terror backgrounds" were killed.

Their list included alleged members of Hamas' military wing, as well as other armed groups. Five of the names on the IDF list matched those on al Qassam Brigades' list.

What were the protests about?

Friday's crowds were the largest seen in Gaza in years. It was held on Palestinian Land Day, which commemorates the confiscation of Palestinian-owned land in Israel in 1976.

Tent cities have been set up to host the marches, which are expected to continue through May 15 when Palestinians mark the anniversary of the "Nakba" ("Catastrophe"), the day after Israel declared independence in 1948.

Roughly 700,000 Palestinians were displaced from their homes during the Arab-Israeli war, which lasted for nearly a year.

The United States plans to move its embassy from Tel Aviv to Jerusalem around May 14, the 70th anniversary of Israel's declaration of independence, increasing the potential for further protests and clashes.

Both Israelis and Palestinians claim Jerusalem as their capital, and to many Palestinians, the change initiated by the Trump administration is viewed as a further erosion of hope for a two-state solution.

But the US blocked the statement Saturday morning.

If one country objects, then the statement cannot be adopted. It is unclear if countries other than the US would have also objected.

"This tragedy underlines the urgency of revitalizing the peace process aiming at creating the conditions for a return to meaningful negotiations for a peaceful solution that will allow Palestinians and Israelis to live side by side peacefully and in security," Guterres was reported as saying before an emergency UN Security Council meeting to address the issue late Friday.

Israel's Defense Minister, Avigdor Liberman, flatly rejected calls for an inquiry into the deaths of Palestinians killed during the Friday protests in Gaza.

Speaking on Israeli Army Radio Sunday, Liberman called those wanting an inquiry hypocrites for attacking Israel before looking into the large-scale killings of Syrians and other groups.

Israel's UN Ambassador Danny Danon lodged a complaint with the United Nations Security Council for holding the emergency session late Friday on the first night of Passover -- a major Jewish holiday -- according to a statement released by Israel's UN Mission on Sunday.

Danon claimed Kuwait intentionally called for the session as Israel's UN mission was observing Passover, thus barring their participation while they observed a religious holiday.