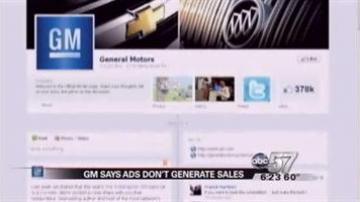 Just two days before Facebook's public stock offering, there is a vote of "no confidence" from General Motors.

On Wednesday, the world's largest automaker pulled its ads from the social media giant, claiming they don't generate enough sales.

GM reportedly spends around $40 million for marketing on Facebook.

The automaker will still maintain its brand pages, but the ads that pop up alongsidee the Facebook screen are going away.

"What do investors want to see?  They want to see sales growth.. they want to see profit growth and this had been one of the questions in terms how well Facebook will be able to do that," said Ellen Braitman of Bloomberg.

In the meantime, Facebook announced on Wednesday that it will make 25 percent more shares available for $38 a pop.