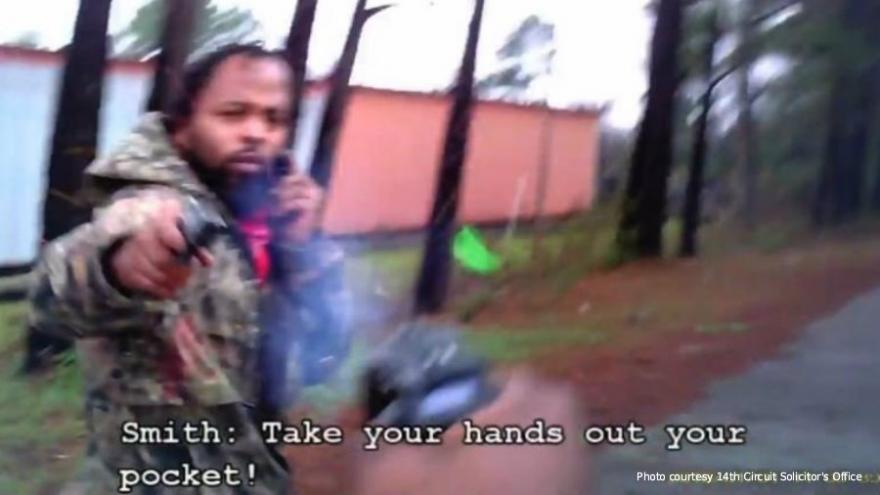 (CNN) -- When a South Carolina police officer was shot last year, he managed to capture the whole incident on video -- thanks to a glasses-mounted camera he bought online.

Officer Quincy Smith of the Estill Police Department was shot at least three times while on duty on New Year's Day in 2016, court records show. Smith lived to tell the tale -- and managed to film the shooting, though not with a typical body camera.

Smith had purchased a pair of glasses online that were outfitted with a camera, and the footage he captured helped send Malcolm Antwan Orr to prison after the jury saw the video in full.

According to CNN affiliate WJCL,Smith bought the glasses to wear on duty. The Estill Police Department does not have body cameras.

Multiple requests for comment to the Estill Police Department were not returned.

Orr, 29, of Hampton County, was convicted Wednesday of attempted murder and possession of a weapon during the commission of a violent crime. He was sentenced to 35 years.

The judge handed down the sentence after a two-day trial and less than 45 minutes of jury deliberation. Orr got the maximum sentence for both charges, 30 years for attempted murder and five years for the weapons charge, according to the 14th Circuit Solicitor's Office.

Supporters of body cameras argue they provide a real-time record of an encounter, improve officer safety and help provide a sense of transparency to the community. But body camera footage has been controversial in cases of officer-involved shootings.

After former Ferguson, Missouri, police officer Darren Wilson shot and killed Michael Brown, an unarmed black teenager, in 2014, activists and lawmakers across the country called for a widespread use of body cameras.

Eric Garner died of a heart attack in 2014 after a New York police sergeant put him in a chokehold during an arrest for selling illegal cigarettes. The entire incident was caught on video. Two grand juries decided not to indict Officer Daniel Pantaleo in Garner's death.

Dominique Heaggan-Brown, a former Milwaukee police officer, was found not guilty in the 2016 fatal shooting of Sylville Smith. Body camera footage that was shown to the jury showed Smith running from Heaggan-Brown on foot and climbing over a fence as he was shot two times.

Paul O'Neal, of Chicago, was shot and killed in 2016 by police who suspected him of stealing a car. The officer who fatally shot O'Neal did not have his body camera on at the time of the shooting.

Shots ring out on a holiday

Smith responded around 11 a.m. to a call of a suspicious man who was said to be stealing items from a nearby grocery store.

The man, who was later identified as Orr, can be seen in the video wearing camouflage and a red bandana and walking in a small grassy area.

Smith can be seen driving up behind him, getting out of his patrol car and calling to Orr. Orr, who is on the phone, appears to Smith's commands and continues to walk away.

"Come here for a second. Come here! You better stop -- if you don't," Smith repeats, while moving toward Orr.

Orr's hand remains in his pocket and he stays on the phone while Smith repeatedly demands that he stop walking. Orr, meanwhile, occasionally glances back at Smith, with an annoyed look.

After several minutes of pursuing Orr with no response or compliance, Smith takes out his stun gun.

With the men just feet apart, Smith points his stun gun at Orr. Orr looks straight at him and pulls out what officials have said is a 9 mm handgun. He fires off at least eight rounds, hitting Smith at least three times.

Smith drops to the ground, the video shows, and runs back to his patrol car to call for help. At one point in the footage, Smith's bloody hand can be seen dialing for assistance.

Smith tells a dispatcher he thinks he's been hit in the neck and that his left arm is broken. For about eight minutes until emergency responders arrive, the officer pleads for help and talks to a bystander.

"Dispatch, please tell my family I love them," he said.

Blood can be seen on the patrol car's decal as Smith lies on his side and waits for help.

Emergency responders arrive and put Smith onto a stretcher -- and secure the camera that captured the whole incident.

More than 18 months later, Smith is still recovering, focusing on physical therapy after being shot in the neck, arm and torso, he told CNN affiliate WJCL.

"I had nightmares sometimes, stuff like that, about the incident," Smith said. "Still trying to heal up injuries to my arm."

Smith didn't draw his firearm that day because he "didn't think it was warranted. He was just walking away, but unfortunately I made a mistake ... and he got the upper hand," the officer said.

But Smith said he forgives Orr -- and even prays for him and his family.

"Both our families are the ones really suffering the most," he said. "Violence and guns are not the answer, that's why I became a police officer."

Smith is still on medical leave, but he told WJCL that he wants to return to the department by the start of next year.