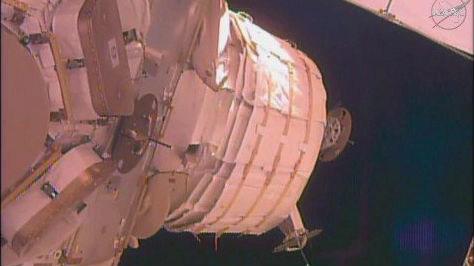 (CNN) -- Early Thursday morning, astronauts on the International Space Station ceased the inflation of the space habitat BEAM after something went wrong.

BEAM, short for Bigelow Expandable Activity Module, started inflating at 6:10 am ET. It was supposed to expand to the size of a small bedroom with breathable air before its two-year stint in space started.

NASA scientists and Bigelow Aerospace, the company that designed BEAM, are investigating why the prototype stopped inflating, but did not offer any reasons.

"NASA and Bigelow Aerospace are working closely to understand why the module did not fully expand today as planned," NASA said in a statement. "Engineers are meeting at the Johnson Space Center in Houston to discuss a path forward for the Bigelow Expandable Activity Module (BEAM)."

After analyzing the data, astronauts may try again to expand the habitat as early as Friday. The event was being televised live on NASA TV.

The deployment of BEAM has been highly anticipated by NASA and Bigelow Aerospace. If successful, the habitat may function as additional living space for astronauts, a necessity as the space agency plans to launch manned missions further into deep space.

As NASA prepares for its journey to Mars in the 2030s, it's looking for new technology that will help humans go to places they've never traveled to before.

NASA officials have hoped that BEAM's technology could also pave a new path for our future space station. The next iteration of the ISS will mostly likely be a commercial station, where NASA is just one of several customers, according to NASA officials.

Traditionally, space structures have exclusively been made of metal. However, BEAM is largely made of fabric that resembles something similar to a Kevlar-like weave. This expandable design has been a favorite for NASA scientists because the material is lighter and more compact than metal and could mean more room on rocket payloads.

NASA has been planning to have an astronaut enter the expandable habitat periodically throughout the two-year mission to run a battery of tests on how the structure fares against solar radiation and extreme fluctuations in temperature --- just some of the conditions that can affect astronauts in long-duration space travel.