Golson shows he can play like champ; Next up BC 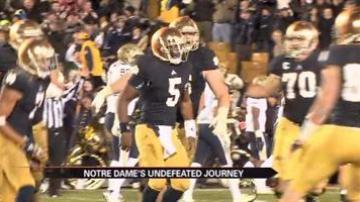 NOTRE DAME, Ind. – Irish Head Coach Brian Kelly said during his Tuesday press conference that his players played like champions against Pitt, but there was a ‘but’ that followed.

"I told the football team that they had the heart of a champion in the way that they battled through triple overtime. But now that we understand that we will fight to the end of a battle, we've got to have the head of a champion, too," said Kelly.

Kelly followed by saying that that means now his players must understand that each week they’re going to face their opponent’s best fight of the season.

"He’s growing and maturing as we move along," said Kelly.

Golson added nearly 75 percent of the Irish’s offensive action in the last chunk of the game. He had 164 of Notre Dame’s 223 total yards in the fourth quarter and overtime.

This came after earlier in the game Golson was pulled out and quarterback Tommy Rees came in.

Kelly added on Tuesday that it’s probably a new experience for Golson to get pulled out of games, so now he’s learning how to deal with it.

"I think he's just a fierce, competitive kid with so much pride that he's never experienced it before. He's walked through every game he's played. He's been the best player on the field. He's dealing with, you know, this is the first time I've ever been taken out of a game," said Kelly.

Up next for the Irish is a trip back to Coach Kelly’s home state for a rematch with Boston College.

He said Golson and the rest of the team will have to continue to play championship-style football to stay undefeated.