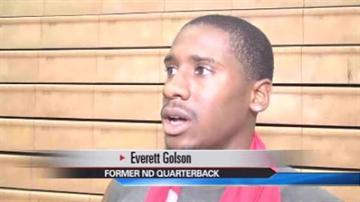 MYRTLE BEACH, S.C. — Former Notre Dame quarterback Everett Golson spoke on camera for the first time since the university suspended him for what he called "poor academic judgment."

The quarterback was removed from the team for the upcoming 2013 fall term.

ABC 57's affiliate in Myrtle Beach caught up with Golson in his hometown during a charity basketball tournament.

"I look forward to returning in the spring," Golson said.

Golson wouldn't talk specifics, but did say he's trying to stay in shape and preparing to return to Notre Dame.